Put this information right at your fingertips with my new book, It's Never Too Late To Sleep Train 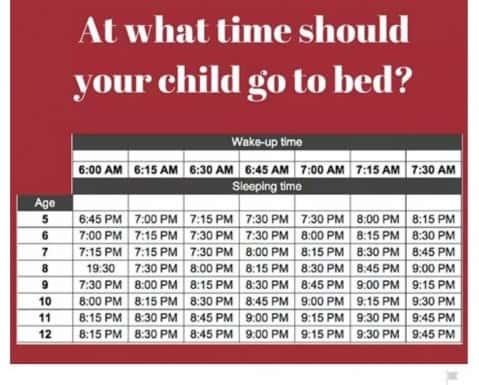 This article was co-written with Terra Ziporyn Snider Ph. D, the co-founder and executive director of Start School Later.

Recently, a school in Wisconsin posted a photo with suggested bedtimes based on children’s age and when they get up in the morning. This resulted in suggested bedtimes as early as 6:45 p.m. for younger children who wake up at 6 a.m..

These seemingly innocuous suggestions were shared over 401,000 times online and generated a great deal of controversy. Some parents seemed to think that these guidelines were totally appropriate and reflected their child’s normal sleep patterns. Others have responded with outrage, saying that these suggestions are unrealistic and impossible to implement. Still others noted that the chart didn’t even include suggestions for children over 12, many of whom have to wake by 5 a.m. to get to school on time. By the extension of this chart’s reasoning, these 16-year-olds should be asleep by 8 p.m.

These conflicting points of view reflect a sense of unease in our society about the pressures placed upon children from elementary school through the teenage years—specifically, that juggling school, extracurriculars, and parents’ careers has compressed unstructured time at home and limited family time. For many children, the result is an inadequate amount of sleep.

Sleep, like breathing and eating, is a basic biological function needed for good health. In a recent partnership between Harvard Medical School and PBS, it was named one of the “three pillars of health,” along with exercise and nutrition. Sleep deprivation in children is unfortunately a common and serious problem.

In children, adequate sleep is critical for health and learning. Growth hormone is secreted during the night so that they grow taller and stronger. Adequate sleep is necessary for memory, learning, attention, and regulation of mood. Sleep deprivation has been associated with consequences as diverse as increased susceptibility to illness, weight gain, poor performance in school, and problems with impulse control.

Many parents struggle to get their young children to bed on time due to a combination of factors, including later dinner times where both parents work, increasing extracurricular and sport involvement for younger children, and the pervasive influence of electronics such as tablets and smartphones, whose light emission can delay the natural onset of sleep.

A recent study by the Centers for Disease Control (CDC) showed that 90% of teenagers were getting less than the recommended 9 hours of sleep per night. When you look at the schedule of the average teenager, it is not difficult to understand why. One of us regularly sees neighborhood high schoolers get onto the bus wake up at 6 a.m. or earlier to get on the bus at 6:40 a.m. for a 7:20 a.m. start time. The other lives in a county where the earliest scheduled pick-up is at 5:23 a.m., with students expected to be at the bus stop at least ten minutes earlier. These hours are not unusual. Over 40% of U.S. high schools start before 8 a.m., and nearly 10% start between 7 and 7:30 a.m., with wake-up and commute times correspondingly earlier.

Unfortunately, these hours conflict with the natural biological predisposition of teenagers to fall asleep around 11 p.m. or later. Some scientists estimate that a wake time for 6 a.m. is equivalent to waking up around 4 a.m. for a 50-year-old. Although many adults are critical of the idea that teenagers need to sleep later or claim that early hours prepare teenagers for “the real world,” most adults are not voluntarily choosing to wake up at 4 a.m..

Both the CDC and the American Academy of Pediatrics recommend that school start times for middle and high school be no earlier than 8:30 a.m., in recognition of the severe effects of sleep deprivation on children. Only 17.7% of schools in the US meet even this modest goal.

This week, scientists in the UK are investigating a more radical solution. Starting this month, students are being tracked at over 100 schools to see if a significantly later start time 10 a.m. results in an improvement in academic achievement.This is in keeping with recent recommendations that best start time for high schoolers would be 10 a.m..

It is time for us in the United States to start prioritizing sleep for our youngest and most vulnerable to grow, learn, and be healthy. Younger children, who tend to rise earlier, need early enough bedtimes to ensure adequate sleep. A good rule of thumb is that all school-aged children under ten have a minimum of ten hours of sleep at night. Some may need more. It is the responsibility of parents to prioritize sleep every night of the week, both by setting good bedtimes and modeling good behavior around sleep, including prioritizing adequate sleep for every member of the family.

For middle and high school students, later school start times are the most effective way to increase the amount of sleep across the board. Families still need to instill good sleep habits and encourage reasonable bedtimes, but these steps will have limited impact so long as teenagers are required to wake up before sunrise. While starting the school day later will not guarantee that most teenagers get adequate sleep, starting the school day too early guarantees that most of them will not.