Home / Commandments of Good Sleep / Prevent Sleep Problems in Kids: Keep Technology Out of The Bedroom 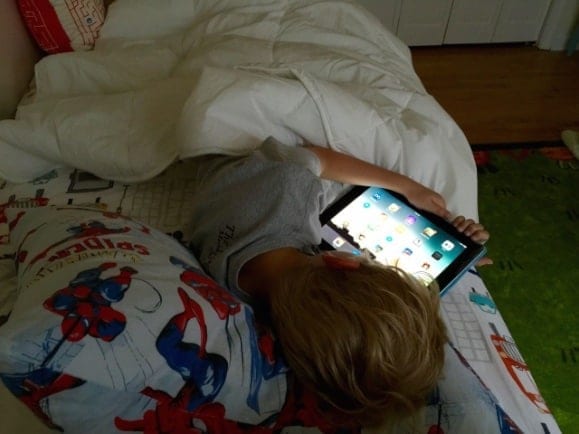 If you met me at a party, and wanted to know my best single piece of advice to keep your child from having sleep problems, here it is:

1. If you child has technology (television, computers, smartphones, tablets, video game systems) in his room at night, TAKE IT OUT.

2. If your child does not have technology in his room at night, DON’T LET IT IN THERE.

When I started writing this blog in 2012, the primary way technology interfered with sleep was via television in bedrooms. In just the past three years, the landscape has evolved. It is very clear to me now that using devices at night is a major cause of sleep disruption in kids and adults.

Here’s a typical scenario. I recently had a mother and daughter in Sleep Clinic for a common concern: the girls was tired in the morning and her mother was worried that she wasn’t getting enough sleep at night [1]. When we talked about her bedtime routine, it became clear that she was on her phone until she fell asleep at night. I told them both that the daughter needed to stop using her phone after 9:30–10 PM. Her mother was incredulous. “I don’t think she’s going to be able to do that.” To be frank, this makes me angry. I’ve heard all of the excuses about why kids can’t be expected to give up their technology at night, and I’m calling shenanigans on them all. Smartphones didn’t even exist until 2007, and teenagers were falling asleep for millenia without the aid of these devices.

It is critical that you do not let your children start using these powerfully addictive devices in their rooms at night. Falling asleep with a television is bad enough. I think smartphones and tablets represent a greater threat to quality sleep for children and teens, for several reasons:

More and More Children Are Struggling with Screen Addiction

In a recent New York Times article, “Screen Addiction Is Taking A Toll on Children”, Jane Brody quotes a Harvard clinical psychologist named Catherine Steiner-Adair: “We’re throwing screens at children all day long, giving them distractions rather than teaching them how to self-soothe, to calm themselves down.” I can tell you that in my practice, I have seen more than a few kids who have been failing out of school, and life, because they simply could not pull themselves away from video games. Does this sound crazy? It did to me, until I kept hearing it over and over again.

Many kids and family are able to strike a good balance around these issues. However, I would still argue that these devices have no place in a child’s bedroom, or during a child’s sleep period.

Our Addiction Is the Problem Here

Part of the problem is that us grow-ups are addicted to these devices ourselves. We can’t help checking Facebook, or Twitter, or Instagram whenever we have a free moment. Like Pavlov’s dog, we can’t help but respond when our phone beeps, pings, lights up, or does something else cool. We have traded our time and attention for a few likes on Facebook. Talking about vacation the other night, a friend said, half in jest, “Where are we going to go to look at our phones next year?”

As parents, we are also addicted to the convenience and the peace and quiet that devices provide. Younger children may pester us ceaselessly until we hand over our phone. Teenagers will retreat into the virtual and real cocoon of their rooms, phone in hand.

Believe me, I am more guilty than most. I blog, I Tweet, I Facebook, and Instagram to beat the band.  I love technology, and really believe in the life-changing properties of these tools to connect people. It connected me to you right now, after all. And I routinely chat with friends around the world: this would have been unimaginable ten years ago.

It is no secret that smartphones and tablets keep you awake at night. Here’s a video explaining why.

In a terrific piece in The Atlantic, Olga Khazan explores the research showing the relationship between smartphones and bad sleep. . She references a survey from 2012 (which might as well be 1950 in tech terms) that 24% of 18–24 year olds think that they don’t sleep well because of technology, and that about 70% of people less than 44 slept with their phones in their room. In a more recent survey, almost 25% of people admitted to falling asleep with their smartphone in their hand. A recent post in the Huffington Post summarizes recent research relating high levels of smartphone use to worse mental health, including a study that high smartphone use was associated with depression and poor sleep. Meir Kryger has also written here previously about the perils of smartphones in the bedroom.

We Need to Set A Better Example

We as parents are responsible for how our children manage their use of technology and electronic media. How do you look to your kids in this context?

One girl among the 1,000 children she interviewed in preparing her book said, “I feel like I’m just boring. I’m boring my dad because he will take any text, any call, any time, even on the ski lift.” A 4-year-old called her father’s smartphone a “stupid phone.”

(From another NYT article, “How to Cut Children’s Screen Time? Say No to Yourself First”)

Ideally, you start working on this when your kids are little. But I don’t think that it is ever too late, even if your kids are teenagers. Technology is a tool. It is up to us how we use it. Here’s my guide to dealing with teenagers’ objections to removing their devices at night:

Here are some of the common ones, and the way to respond:

And here are some good rules of thumb that I recommend to friends, families, and patients.

Healthy Rules for Technology At Bedtime

For more on this topic, the indispensable Claire McCarthy published an article at HuffPo on “The Five Pieces of Advice about Screens I’d Give if Parents Ever Asked”.

I would be lying if I said we had it all figured out in our home. We struggle every day to manage our use of electronics (both ours and our children). Generally, our rules include: no electronics in the bedroom, no video games on school days, limited television after school only, and some soft limits on screen time and video games on the weekend. What has worked for you in your home? What are you struggling with?

[1] : As always, all patients here are fictionalized. Also, the above photo was posed. No children had their sleep disrupted during the production of this blog post.